Is this the era of the alien megastructure? We’ve got mainstream scientists suggesting that there may be one surrounding a distant star. In 2015, a researcher took video of a giant structure appearing and then vanishing above Australia. And now, amateur astronomers have taken photographs and video of something unexpected near Jupiter—a giant structure that should not be there.

This object near Jupiter, circled in red, is not a
moon and may be an alien megastructure

The planet Jupiter has a stunning 67 moons, putting our single moon to shame. One of them is special: Europa, which is small compared to Earth (and about the size of our own moon), has been the focus of scientific study for decades. In the saga of 2001: a Space Odyssey (the novels and the films), Europa is where ancient aliens are intent on creating another species, cousins to the human race the aliens have already created.

It’s not all science fiction, though. Scientists around the world consider Europa to be the only place where there is a real chance of finding life within our own solar system. NASA’s JUICE project (“JUpiter ICy moons Explorer”) is set to launch in 2022, and will explore the undersea worlds on several distant moons—most importantly, the vast seas of Europa. According to scientists, Europa’s oceans are salty, like our own, and have a rocky sea floor that is an ideal place for life to emerge. 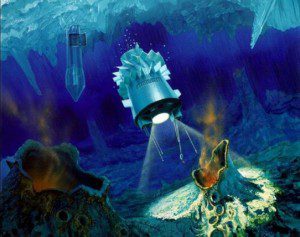 Or, maybe it already has.

Louis Read, a prolific amateur astronomer based in the UK, was taking photos of Jupiter and its moons recently when he spotted a large, unexplained object. Another astronomer, working independently, was also photographing Jupiter in the same time period and captured the same anomaly, although his photos have not yet been released. Louis Read was so stunned by what he found that he contacted SecureTeam10, a UFO research organization, for examination. The photos, taken using a Canon 650D camera with a 7D-300 millimeter telescopic lens, show the huge object appearing to move toward Jupiter and in the direction of the moon Europa in particular.

The research team did a careful analysis of the photos, even consulting a 3D simulation of the solar system to rule out misidentification of one of Jupiter’s many moons. The result: that’s no moon. It’s a space station. (Or, uh, space ship.)

“We definitely have a reflective UFO up there caught on camera,” says Tyler Glockner, spokesman for SecureTeam10. “One thing for sure is that this definitely doesn’t belong there and it wouldn’t surprise me in the least if this was some sort of alien craft.”

Note: if you’re interested in strange things found in our solar system, you might want to know about how researchers from CalTech just discovered evidence for Planet X, the missing planet foretold by the ancient Sumerians.