We’ve all seen inside Area 51—in the movies. Independence Day (1996), Paul (2011), and that awful Area 51 (2014), and on The X-Files, it’s shown as super-high-tech and otherworldly. Of course it would look like that! They have UFO technology. The base is guarded by huge fences and helicopter patrol, right?

There is no fence around it! We at Area51.org have personally been to the border of the base, and can tell you that there’s no fence to hop—just signs with warnings like “lethal force authorized”. We saw and heard no helicopters, although we did spot the legendary “camo dudes“, the private security guards hired to protect the base. They drive around in ordinary trucks.

Area 51 may well have alien tech hidden underground, but according to insiders who have spilled the beans, the inside of the real Area 51 looks old and run down. 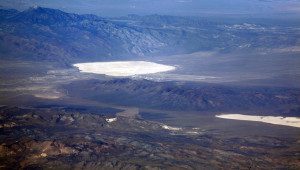 Area 51 from the air

Bob Lazar, the guy who says he worked there in the ’80s reverse-engineering UFO technology, describes the interior of the underground base as plain and ordinary, much like an old office building with cubicles and meeting rooms. There’s a lot of dust and rust, and not much in the way of neon-cyber whiz-bang technology. That is why it’s so striking, according to witnesses, when you see the alien spacecraft housed there underground—it’s all being held in such a drab, unremarkable place.

No word on what the alien visitors think of these digs, but insiders do claim to have sighted them there, lurking underground.

At least it didn’t until 2013, when the US government finally declassified a CIA document that admitted that a secret base exists out in the Nevada desert. Up until that point, the government absolutely denied that any such base existed, even though it’s surrounded by warning signs authorizing “the use of deadly force” if you enter, and despite the fact that unfortunate pilots who wandered into the base’s airspace were either forced down by Air Force jets or, in some cases, shot down. Later in 2013, Barack Obama became the first president to mention Area 51 by name in public.

Neither the CIA report nor the president mentioned aliens, but, well, that’s not surprising. This is the government we’re talking about.

All that official silence didn’t stop Nevada governor Bob Miller, though. In 1996, he officially declared nearby Highway 375 to be Nevada’s “Extraterrestrial Highway”—a publicity stunt tied in with the movie Independence Day.

3- It got bigger—for a surprising reason

Things were great for Glenn Campbell—an Area 51 researcher, not the singer—until 1995. Glenn, who was living in nearby Rachel, Nevada, had discovered a peak not far from Area 51, and it was high enough that he could see the whole base. The peak didn’t appear to have a name, so Glenn dubbed it “Freedom Ridge”. The name stuck.

Vantage points for Area 51 (some forbidden)

He brought others out to Freedom Ridge, too—including professional journalists, who’d become fascinated with Glenn’s adventures as a self-styled investigator of Area 51. A film crew from ABC News were out at Freedom Ridge with Glenn when they were arrested, and their cameras confiscated by Area 51 guards. That may have been the last straw.

In 1995, the US government seized the land around Freedom Ridge and another vantage point, Whitesides Mountain. It increased the size of Area 51 only somewhat, but it made it darn near impossible to get a view of the base from the ground without telescopes or binoculars.

The base is 60 square miles now—and growing. How long until the government seizes additional land? It’s only a matter of time.

The government and the military have a lot of nicknames for the base, and they usually don’t call it “Area 51”. Instead, they’ve referred to it as Dreamland, Paradise Ranch, Homey Airport, or as just Groom Lake (after the dry lake bed the base is built on). Its first official name was Watertown when it opened in 1956. We get the name “Area 51” from old military maps of the area from the 1950s.

5- There’s a nightclub on base

A baseball field at Area 51

No kidding; former employees have said that Area 51 has its own extravagant disco right in the heart of the facility, where employees blow off steam at night after working on ultra-secret projects all day. (Obviously, reverse-engineering UFO technology can take a lot out of you.) We wonder: is the club called Dreamland?

That’s not all: it also has a baseball field (above-ground, see the photo), tennis courts, and a large private gym. When it first opened, the only amenities were a single tennis court and a bowling alley, but obviously they’ve been expanding. Maybe they even have Wi-Fi.

As we mentioned before, until 1995, you could make an easy hike to mountain peaks near the base called Freedom Ridge and White Sides. From those vantage points, you could get a pretty good look at the distant base, even without binoculars. So, of course, word got out. When the government realized that people were spying on the base, it seized the land.

It’s not an easy hike, but it’s only a little over a mile. Being remote desert land, this is dangerous, so we’re not recommending it. But it is possible. If you did go, you’d want to bring high-powered binoculars, or maybe a telescope.

Bird and Hike, a hiking website, has the exact info—look for the keyword “Tikaboo” to find the hike. And do not, under any circumstances, venture past the border into Area 51!

7- You can take a tour—sort of

Take a tour near Area 51

If you dream of a guided tour of the actual Area 51 base, well, no, they don’t do that. Surprisingly, though, the US Department of Energy does give weekday tours of areas in the Nevada Test Site—think nuclear testing. The tours take all day and require government background checks. They don’t venture into Area 51, but reports say they get pretty darned close, ending up just a bit to the west of the secret base. The tour is free but there are restrictions:

There are strict rules in order to take this tour including proper dress code (no shorts/sandals), age-limit of 14+ years old; no cell phones, cameras or computers, firearms, and a background check is required. You MUST arrange tours months in advance and be cleared by background investigators before taking this tour.

Adventurers determined to get to the border of the base and see one of the famous warning signs are usually advised to take the Extraterrestrial Highway (Nevada 375) and make a left at the Black Mailbox. That mailbox became a famous stopping point for the curious and the intrepid. It was even used as a meeting place for UFO hunters!

Why, though, was it called the Black Mailbox when it was actually white?

The White Mailbox,
Removed in 2015

Once upon a time, there was a black mailbox on Highway 375. When Area 51 entered the public mind in the early ’90s, people on their way to the base border would vandalize the mailbox, or drop mail addressed to aliens. Steve Medlin grew understandably tired of this. So, when governor Bob Miller decided to rename Highway 375 as the Extraterrestrial Highway in a ceremony that also happened to be a promotional stunt for the film Independence Day, Medlin saw opportunity. He arranged to have the mailbox auctioned off as part of the festivities. (It fetched a healthy $1000 from a UFO enthusiast.)

He replaced it with a white mailbox—actually a pair of mailboxes. The top box was for his own, real mail; there was also a lower box marked “Alien” so that those wishing to communicate with extraterrestrials would have a place to drop their postcards.

In January of 2015, Medlin removed the box after it was nearly destroyed by vandals; enough was enough, apparently.