Insurance is a strange thing. You pay for it hoping that you’ll never need it,  but aren’t you glad you have it when you do? Most people have insurance policies covering all of their most important and valuable possessions like homes, cars, motorcycles or boats. In case of loss, theft or destruction by catastrophes like fire, floods, earthquakes, insurance has us covered. But what about alien abductions?

Paid on Proof of Alien Abduction 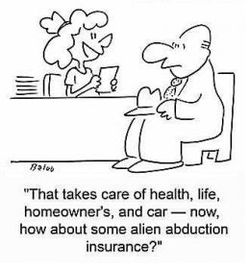 Who would buy alien abduction insurance, you may ask? The most famous policy holders were the death cult known as Heaven’s Gate. Heaven’s Gate cult members believed that the return of the Hale-Bopp comet in 1997 would be accompanied by an alien mothership that would help them escape from doomed planet Earth. The strange beliefs of Heaven’s Gate were even covered by Art Bell on his popular radio program, Coast to Coast AM.

Unfortunately, in order to join the mothership, 39 of the cult members committed mass suicide. The deceased were dressed in identical black sweatsuits with “Heaven’s Gate Away Team” armbands. Amongst the deceased was Thomas Nichols, brother of Nichelle Nichols who played Uhura on the original Star Trek.

After the tragic death of the Heaven’s Gate cult, Burgess temporarily halted sales of his alien abduction insurance policy, but later resumed sales after the incident left the news cycle. Burgess was well-known for offering other bizarre insurance policies such as protection against virgin – selling an estimated 15,000 policies worldwide.

Burgess has since distanced himself from what he describes as “PR stunts” and sold the latest incarnation of his insurance company, British Insurance, for £25m in 2007.

CodenameSheba
Weird science researcher, mystery investigator, cockeyed optimist. If what you see in front of your eyes every day is the sum of things, why the hell get out of bed in the morning?