You looking to #StormArea51? Read all about it (click this link!).

You’ve heard the name “Area 51” and that it’s some kind of secret place. You might have heard that it has something to do with UFOs and aliens.

Area 51 as Seen from a Satellite,
Next to Groom Dry Lake

We at area51.org are here to fill in the blanks.

Way out in the isolated high desert in Nevada sits the secret base where the US government hides its best secrets. Area 51 is famous for being a mystery, the place “where our government has come when it wants to be alone” (as Popular Mechanics put it). Where is it, exactly? Why is it there, when did it start, and what’s hidden there? What the heck is going on out there?

We’ll tell you—at least as much as we can.

What we know for sure

What it is: Area 51 is a top-secret US government base in the state of Nevada. Highly classified military vehicles and weapons are developed there: the Stealth fighter, the “Star Wars” SDI (Strategic Defense Initiative) missile defense system, and without a doubt, a lot more otherworldly hi-tech that no one knows anything about. Yet.

Where it is: the compound lies out in the desolate high desert, three hours from Las Vegas, far away from civilization. Miles of empty land surround the base, and those who have dared to walk across its borders have been quickly arrested—or worse.

Parts of the base are visible via satellite—it’s even on Google Earth. Most of the base, though, is said to be in a giant underground complex. It’s possible to see what’s above ground for yourself—at a distance, some 26 miles away—if you’re willing to make a grueling hike.

What you can see above-ground: standing on Tikaboo Peak, the best view you can legally get of Area 51, you can’t miss Groom Dry Lake. It’s a big, stark white patch, a dry lake bed, in the midst of mountains and desert. Right next to it you can just make out the hangars of Area 51, and if you peer really carefully through high-quality binoculars, you can see the long runways.

Why long runways? Secret aircraft developed there—like the B-52 and the SR-71 Blackbird and even newer, unknown craft—need them. The runways light up only when vehicles take off and land, which is probably OK with the pilots, since testing is almost always done at night.

Area 51’s hangars contain, well, god-only-knows what—but probably aircraft. A new hangar appeared in 2007, and an especially massive new one showed up in 2014; it’s some 90 feet tall and large enough to easily hold a 747. 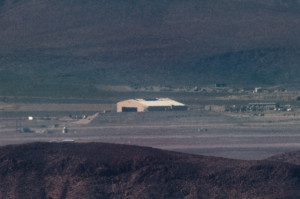 You can’t see the tennis courts and baseball diamond from the Tikaboo Peak vantage point, but they’re there if you look at satellite images. Really, there is a small sports complex at Area 51. Who knew these top-secret engineers were so athletic?

Other amenities that are not obviously visible in satellite images: the base’s bowling alley, and a nightclub. Yes, as in a discotheque. They like to party at Area 51.

How it got started: if one person is the founder of the world’s most famous secret base, it would be Kelly Johnson, a pilot and aircraft designer. Johnson created, among other planes, the U-2, a spy plane that could fly as high as 70,000 feet, and the famous SR-71 Blackbird, the first production jet capable of exceeding Mach 3. Johnson said that he knew the Groom Dry Lake area would be home to the secret base immediately when he saw it: “We flew over it and within thirty seconds, you knew that was the place … it was right by a dry lake. Man alive, we looked at that lake, and we all looked at each other … it was a perfect natural landing field … as smooth as a billiard table without anything being done to it.”

That’s as much as anyone can say about Area 51 for certain. Officials denied Area 51 even existed until 2013, and it still doesn’t appear on USGS maps.

So what about the rumors? What lies underneath the base?

Former employee reveals all: In 1989, a man named Bob Lazar came forward to say that he’d been employed as an engineer at Area 51, and his job had been to work on a UFO. A real UFO, from another planet, flown here by real aliens. He was told to “reverse-engineer” it—to figure out how it worked.

Lazar says that the government actually has quite a few captured spacecraft, most of them saucer-like, all hidden at a part of Area 51 called S-4. The particular ship he was assigned to dissect reminded him of a sports car turned into a UFO, and he dubbed it “the sportsmodel”.

The base becomes famous for aliens: Lazar’s revelations made international news, and it opened floodgates of inquiries into this secret base. Had aliens and technology from the Roswell Incident been taken there? Were there aliens at the base now? Lazar says he caught a glimpse of one once, and that in his training, he was briefed on humankind’s history of contact with extraterrestrials. They came, he was told, from the fourth planet of the Zeta Reticuli system, some 39 light years from Earth. They matched the description of the standard gray aliens—huge heads, huge eyes, tiny bodies, no noses. Base employees referred to them as “the kids”.

Secret is out: Area 51 has become the most famous secret in the world. It’s been featured in movies (Independence Day, Paul, Area 51) and referenced in countless other movies, TV shows, and video games. Despite all that, secret work at the real base seems to continue unabated. Security around the base is tighter than ever, and any secret activity that may have been going on above-ground has now been moved into buildings and underground. Test flights do continue at night, according to observers—and some are unexplained. As author David Darlington says of his own base observations, “By the time I went home, I could explain every sighting … except one: dots that jumped through space a quarter of a mile at a time [emphasis mine].”

Security: In the buffer zone, a large swath of government-owned desert land surrounding the base, private security guards known as “camo dudes” patrol 24 hours a day, watching all who come anywhere near the borders. The land surrounding the buffer zone is public land, free for all comers, but researchers have discovered that Area 51 security has placed sensors near the makeshift dirt roads so they can tell when people are approaching. Those who dare to cross the border are quickly arrested and handed over to the county sheriff for prosecution—although the guards are authorized to take more drastic measures if they feel it’s warranted. Former “camo dude” Fred Dunham has said, “If they [violators] demonstrate[d] they were going to try to penetrate, they [base management] gave me the all-clear to waste them.”

Viewing sites closed: The two best venues for legally viewing Area 51, known as White Sides Mountain and Freedom Ridge, were absorbed into the base’s land in an official government act in 1995. One vantage point remains, Tikaboo Peak, although getting there involves a dangerous and grueling day-long hike.

Regardless of this, Area 51 tourism continues. Road-trippers delight in taking Highway 375 (officially named “Nevada’s Extraterrestrial Highway” by the state) out to where the fabled Black Mailbox once stood, out to the marked base border to maybe take a selfie, and then continue down 375 for food and knick-knacks at the legendary Little A’Le’Inn in Rachel, the closest town to the base.

Spy over the Internet: Want to take a peak out at Area 51 right this second? You can do it, now that Nevada’s Desert Research Institute has mounted a webcam on Tikaboo Peak. We haven’t tried going to the website at night, but it’s easy to imagine that you might see the lights of some experimental aircraft—or maybe something else.

Also, check out this legal footage taken by people who hiked out to Tikaboo Peak, the closest vantage point to Area 51.